We had plans to go to Bear Lake with Kade's family this weekend, but our reservations got messed up. So, we had to make other plans. We still wanted to go camping because we hadn't been this year and this was supposed to be our last hurrah before school started. We did some researching and decided that Scout Mountain outside of Pocatello, ID looked like a good place to camp. So off we went. We camped there Wednesday and Thursday night. We enjoyed some nice nature walks, playing in the creek, and of course good camp food. On Friday morning, we packed up and headed in to Pocatello. We spent the morning at the Museum of Natural History and then went to Ross park to meet up with cousins and go swimming. The pool was a hit. Liberty, Halle, and Alyssa spent all day in the lazy river while the rest of us bounced back and forth between the lazy river and the kiddie area. The kids had a good time and I'm glad we got one good camping trip in this summer before we had to send the kids off to school.
Kade, Brylee and Brancyn setting up camp. Brancyn's favorite tools were the ax and the roaster sticks-of course. He couldn't play with something safe like a flashlight. 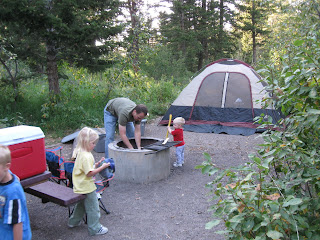 Deidra trying to get the monster sleeping bags zipped together. It was worth it-Kade and I stayed plenty warm. Too bad the same can't be said for the kids. I couldn't keep them in their sleeping bags for anything. 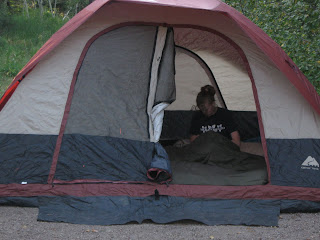 Kade helped the kids build a dam in the creek. They thought that was great and enjoyed wading in the pool on the other side. When it was time to go, they broke the dam and watched the flood of water head down the hill. Adding water to a family outing always means success. 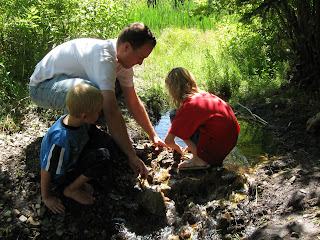 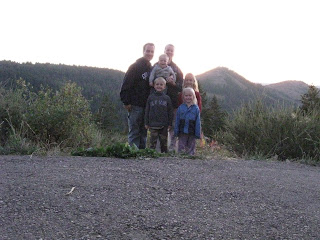 I forgot to add the funnest part of our camping trip. We had some fun nighttime visitors-skunks. We had to be in our bed by about 10 and pray that you didn't have to get up and use the restroom during the night. You could here them scurrying around our tent all night. The second night I wasn't so lucky. 3:00 a.m. rolled around and I just had to use the restroom. I woke Kade up and asked him if he'd come with me because I didn't have my contacts in and I didn't want to run into a skunk. He said he'd come, but then looked at his clock and said "It's 3:00 if they were out, they won't be anymore they'll be in bed" I asked if he was sure of that ( I wasn't convinced) He said he was so off I went to the bathroom by myself. On my way back I heard scurrying in the bushes off to my left, so I picked up the pace. When I got back to the tent Kade started laughing and asked what he'd told me. He was still half asleep and thought I was asking to go visit someone. He said the skunks were probably still out and I told him I thought so too. Less than a half hour later they were scurrying around our tent again. Whew, glad I made it through that one ok!

We were looking for something fun to do today when I remembered it was the County Fair. We lived one block from the fair grounds in our last house, but somehow never made it to the fair. Now we've moved across town and we went-go figure. Anyways, the kids enjoyed looking at the animals, listening to the roosters crow, looking at art displays, and they all especially enjoyed their complimentary balloon! It was a fun afternoon. We'll have to put it on the list for next year. (Somehow I didn't get a picture of Brylee at the fair. I'm always missing one kid in the picture line-up:) 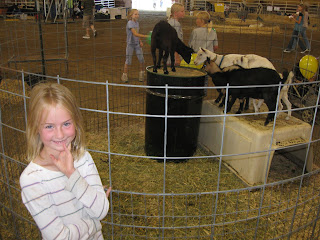 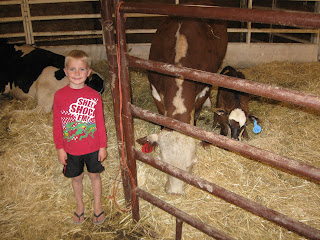 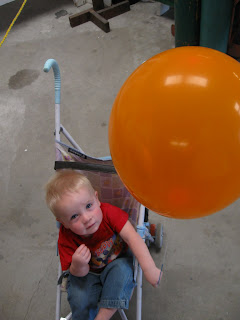 Tonight we enjoyed a team b-b-q as well as some pretty heart wenching goodbyes. Our dancers were to load a bus the very next morning at six a.m. so this was it. When we started out on this whole adventure, we were warned that we would cry when our dancers left. I believed that we could become somewhat attached to them, but thought there was no way I was going to cry after having only know these guys for a week. Not to mention we couldn't understand them half of the time. But this was an amazing lesson in service to me. I learned more fully that when you serve others you love them. How else can you explain the fact that these two guys feel like family to us now? The kids stayed up with us until almost eleven this night. No one said much, we just sat there being together. Occassionaly one of them would lean over and hug one of the kids or pat them on the head. The kids went to bed crying as did Kade and I. I guess we were warned:) But, I would do it all again. We love you Yosuke and Yukinobu!!!!
Yosuke feeding Brancyn off of his own plate. If that isn't brotherly love! 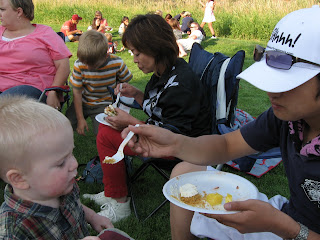 Yuki and Brylee. With Yuki hear, it was like having and extra Grandpa around. He was so good with the kids and Brylee especially loved him. 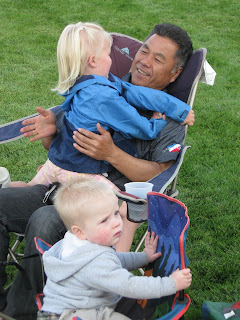 Yosuke and Kade wearing their matching Wii pajamas. Yosuke bought these for Kade for his birhtday and then got a matching pair for himself. 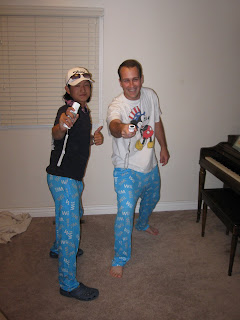 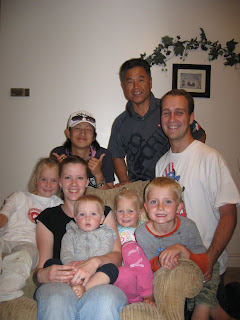 Yosuke says he wants to come back to the United States again and asked if he could stay with us when he comes to visit. We told him he was welcome anytime. I hope he really does come back . . . .

These two night were the big performances in Rexburg. All of the dancers were amazing and we enjoyed seeing a bit of their culture. We took Liberty, Kayson, Grammy, and Grampy with us the first night and Brylee, Grammy, and Judy (Grammy's best friend) the second night. I wish I could have got better pictures, but sitting up in the stand with a little point and shoot camera just doesn't get any better than this. 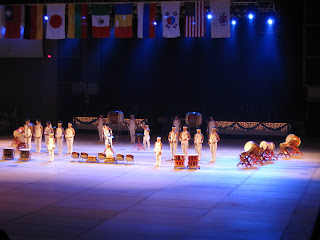 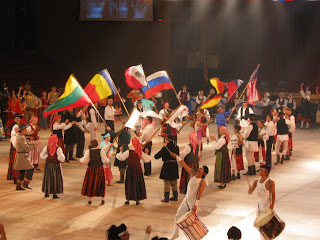 August 8, 2009.
Today they had a gift exchange between the dance teams and the Chamber of Commerce as well as a dancers and host family picnic. The weather turned pretty chilly on us so they moved that 'picnic' to the Heart Auditorium. It was a fun day, but a little melancholy. We knew our time with our dancers was drawing to a close so it was a little sad.
Yosuke and Kayson 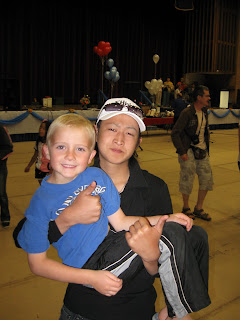 Yosuke, Brancyn, and Yuki. Everybody loved Brancyn from the Japanese team. I think he got enough cheek pinching and head rubbing to last anyone a lifetiem:) 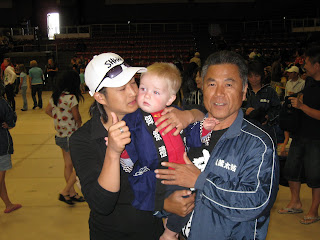 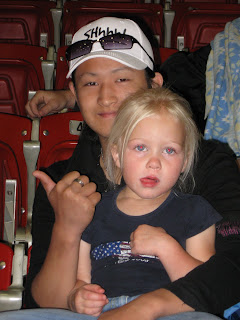 Kade and Brancyn. This week has thoroughly worn Brancyn out. 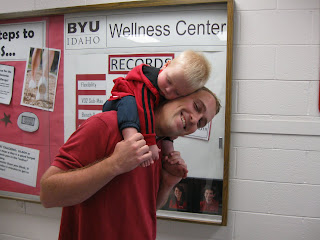 I didn't catch a picture of Liberty today, she was having too much fun running around.

August 7, 2009.
Kade and my brother-in-law Shaun took the guys fishing today. They had requested this activity, but it didn't prove to be as fun as they had hoped. They caught one small fish and a lot of mud and weeds. Oh well, it was still an experience!
Yukinobu 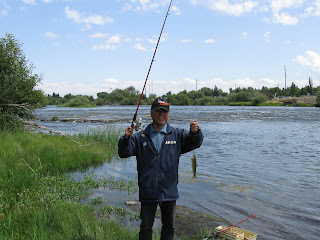 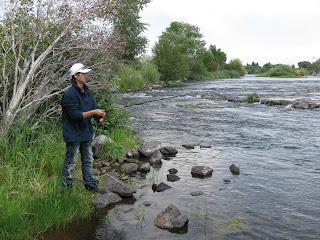 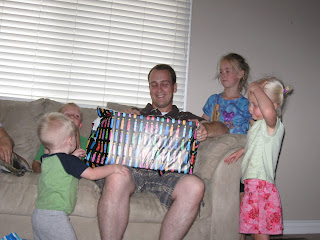 Kade enjoyed a birthday dinner of Lasagna and Garlic Bread and finished off with carrot cake and ice cream. It was nice to have a little family down time during this busy week.

August 6, 2009.
Over the next couple of days, we didn't see a lot of our dancers. They had performances in Idaho Falls and Blackfoot. But, on Thursday I got to take the kids to Youth Culture Days. We got to go and meet dancers from the different country's and dance with them. We only signed up for two this year- The U.S. and Japan. I have no idea what happened to my U.S. pics, but here are a few pics of the kids having fun on the Japanese drums.

Here is our biggest kid, Kade, having fun with Kayson. 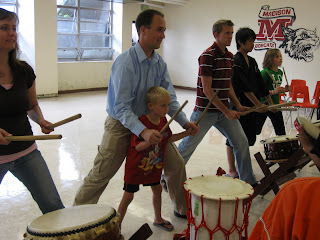 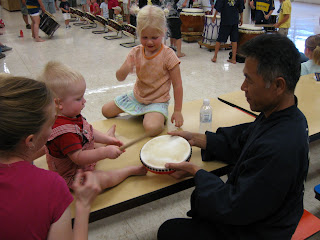 Brancyn was having so much fun that we couldn't get him to be quiet during instruction time-he wanted to be banging on a drum if we tried to stop hime we got one big earful!

Liberty enjoying a turn on the drums. 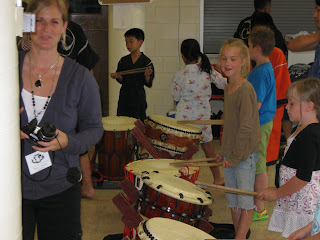 August 3, 2009.
The street parade was a lot of fun. We got to see our dancers perform, Kade danced with the German dancers, and we even came back to check out the public street dance later that night. 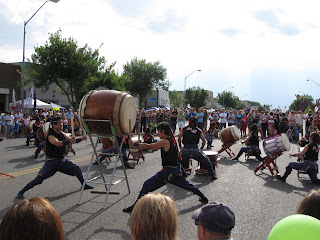 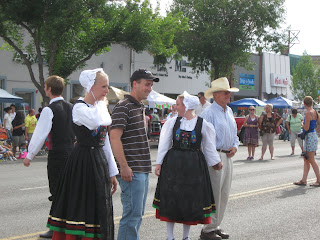 This video clip is just a short bit of the number our team did at the street parade. They were amazing. I would have uploaded a longer video, but they were just too long. Hope you enjoy this short clip.

Man, I don't know what my problem is, but I just can't get excited about blogging lately. It feels like just another chore that I'm putting off. But, I've been putting it off too long, so I guess it's time to play catch up again.
August 3, 2009
Today is Kade's birthday, but because we have the dancers at our house, we decided that we would wait until Wednesday to celebrate. (The dancers would be off performin elsewhere that day-so we thought we could celebrate uniterrupted.) But, we found out that it was Yuki's daughters birthday as well and that she was in Rexburg with the team, so we called up the other host family and planned an impromptu birthday party anyway. We started off the morning with a fun bowling game. Yuki was amazing! He scored over 200 points! The rest of us at least broke 100:) 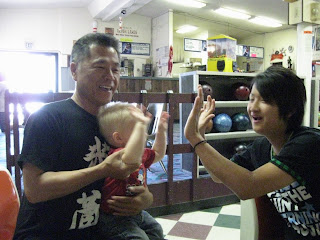 Yuki, Brancyn, and Yosuke High-fiving their amazing moves.
After bowling, we went to Wendy's for lunch. The honey b-b-q chicken was an instant hit with Yoskue. After lunch we met up with the other host family for a little miniature golf, arcade games, and laser tag. 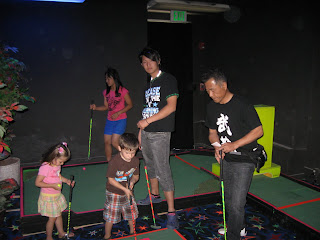 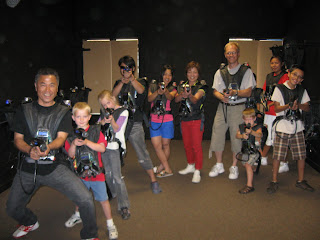 Finally we wrapped it all up with gifts, icecream, and cake at our house. We finished all of the celebrating just in time to get the dancers to the street parade planned for that night. 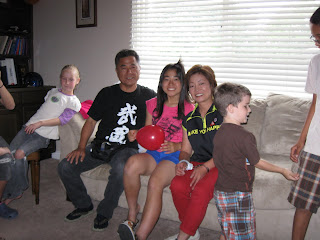 Yuki with his family I believe it is Hazuki and Hukimo(but i'm not sure:)