My Grandma's birthday is on St. Patricks Day and we usually try to get a visit in. With all of the remodeling that was going on, I spaced until the next day. We worked out a visit for Friday. Michelene and her kids and me and all my kids except Liberty enjoyed a fun visit. I thought to bring my camera this time. I don't have many recent pics of my grandma and not really any of her with the kids. So we got one for the scrapbook this year. 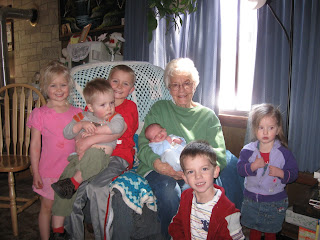 Brylee turned four today!!
Brylee was supposed to have her big party with friends this year. We had been talking about it and planning it. One morning I was double checking what she wanted so that I could get invitations out and she told me she didnt want all her friends she just wanted Grammy and Grampy to come. So that's what we did. It really ended up being a blessing for me, 'cuz we were right in the middle of all that remodeling, and it would have been very hard to have a bunch of extra kids running around.

So we stared off Brylee's big day with a breakfast of French toast with strawberries and whip cream, with a side of bacon. 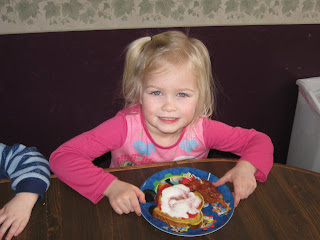 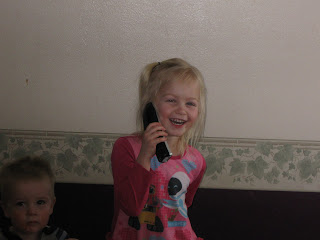 Brylee asked for a cake with a butterfly on it and flowers. So this is what we came up with. (She also picked a lemon cake with sherbet to go alongside. Later she realized that wasn't her favorite combo. One or the other was fine, but not together. Oh well, now she knows for next time.) 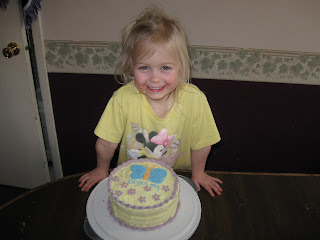 In the evening, we had Grammy and Grampy come for pizza and pink lemonade. And then of course presents and cake. Brylee got a new Ken doll form Grammy (for the dollhouse) and some cute clothes. She got some workbooks (she's always begging for homework) clothes, candy, and a dollhouse from us. Liberty gave her some money! 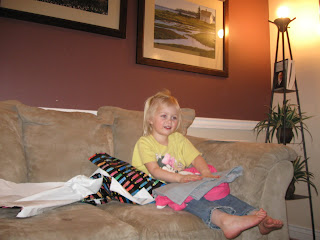 She seemed to like her gifts, but I have to post the video of her opening the dollhouse.

I think the video says it all, but in case you are having a hard time following what is being said, I'll recap. The attice of Brylees dollhouse is on hinges, so we put a basketball up there to disguis the appearance of the dollhouse. When she opened up the gift, she zeroed in on the ball instead of the house. She absolutely loves basketball. She practices dribbling all the time and like to watch it with her dad on tv. So it was pretty funny. She did like the doll house too. She just had to look at it and understand what it was!

So, after Kade saw how wonderful I made the Barbie house look, he asked why I didn't make his house look that good. Well, he asked for it . . . . .I started in on our house. These pictures don't do all of the changes justice, but I thought I'd post them anyways, to kind of give you and idea of what we did. It started with me just wanting new carpet. But then we decided we better replace the hard floor surfaces first, which then led to replacing toilets and vanitites in the bathrooms, which then led to getting a new bath surround so the tub didn't look out of place, which finally led to new carpet and paint throughout the upper floor of our house. I was so excited about it, that I scheduled out carpet and new vinyl intalls too close together and we worked ourselves to death for two weeks straight. But we are happy with the results so far and will be even happier when all the details are finished.

Laundry room before (I like to think of this room as outer darkness.) It was so gross and obviously divided from the rest of the house. 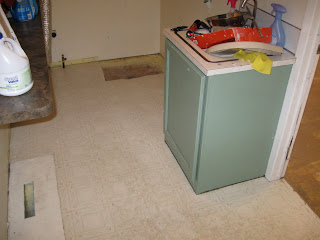 New laundry room floor (ignore all the clutter-I've been catching up on long over due laundry:) I will also still be painting the cabinets black in here at some point to finishe this room up as well as putting trim back up. 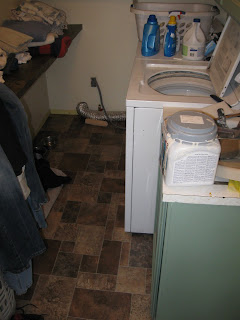 Old Master bathroom (I forgot to take pics when the toilet and sink were still in here) The old sink was painted white (and it wasn't done well, there were dried paint drips all over it, and the toilet was old and didn't have the best flush power.) 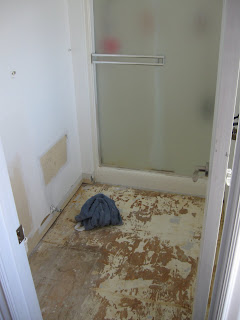 New master bathroom. I still need to finish doing touch up paint and we think we might take the shower doors off and just hang a nice curtain that coordinates with everything. But I love the new paint color. My bathroom is feels so calming instead of sterile now. 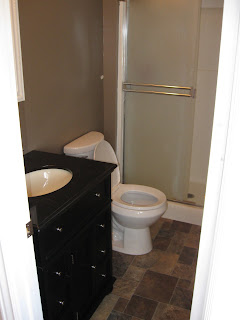 This is the old guest bathroom. Kade was working on getting the old sink out. It was painted a 'lovely' green and the counter top was white with gold veins running throuh it. This toilet was also old and didn't have very great flush power. Brancyn was such a good helper. He thought to go and get the flashlight on his own and held it for Kade to see under the sink. He is soooo into Kade's tools. 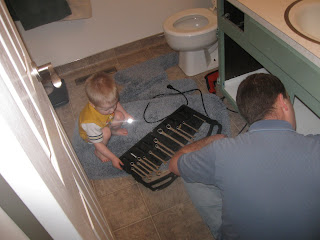 This is the almost there new guest bathroom. Kade still has to intall the faucet for the sink and the new tub surround that you can see leaning agains the wall. 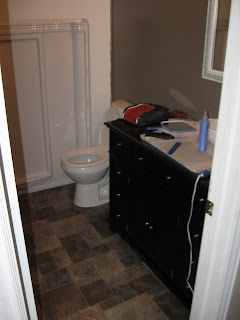 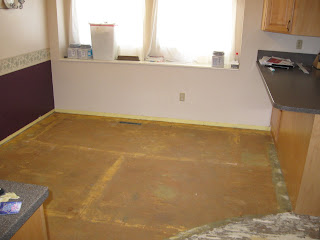 Here is the new kitchen flooring. It isn't hugely different in coloring from what we had in the kitchen before, but it is a little warmer color and a way better pattern not to mention it flows from the kitchen into the dining room and then into the laundry room-not three different floor types anymore!! 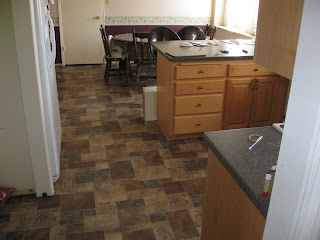 We had to move the kitchen appliances out twice. Once for the new vinyl and again for the new vinyl:) (They didn't patch the floor very well the first time and had to come back and do some more patching). Brancyn watched the whole process (we had to take the fridge doors off to get it out of the kitchen) So by the second time around, he was ready with his tools and knew right where to go to work! 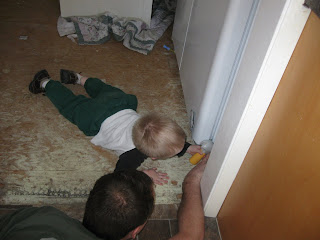 This is the old living room. Not bad. It's just the carpet was super light colored and showed everything, it didn't have good padding either, and there was a huge outdated hutch that divided the room in half. 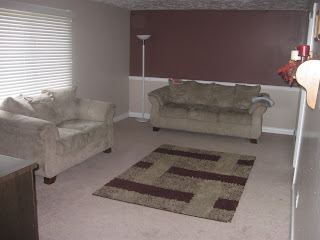 New living room. It has beautiful carpet with nice thick pad. The color hides everything, yay! I still haven't decided how to set up this crazy sized room (now that the hutch has been removed, it is 12' x 32' ) But I've been thinking of some ideas and I'll have it worked out in no time. In the mean time, I'm enjoying the absolutly luxurious feel of new carpet!! 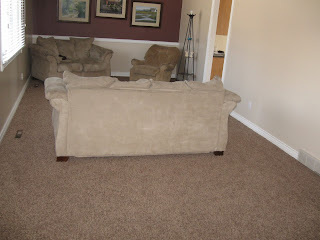 Well, like I said, Kade asked for it and he got it. I did almost all the same things as in the Barbie house. New paint, carpet and vinyl!

February-March
A family in our ward gave us a doll house a few weeks ago. They're kids are all grown and gone and they thought we might be able to get more use out of it. So we made plans to redecorate it for Brylee's birthday. 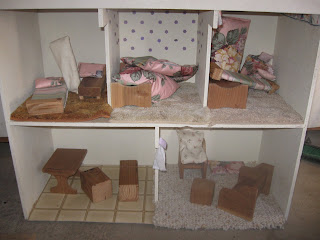 Here is an after of the kitchen. We (the kids and I) made curtains that open and close, a tablecloth, and plates with different food items painted onto each side. We also added hooks for the dishtowels. 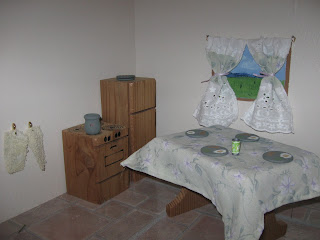 We made a clock for the kitchen and Liberty had the idea to paint the time that Brylee was born on it-so that's what we did. 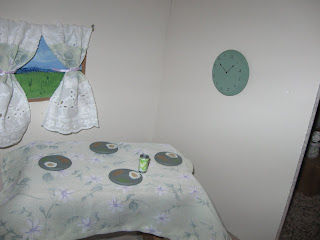 The house came with the wood furniture, but we made couch cushions that could be removed and little throw pillows, we also paintd a vase and put flowers in it for the coffee table. I painted on windows with scenes of quaking aspens, mountains, clouds, etc. 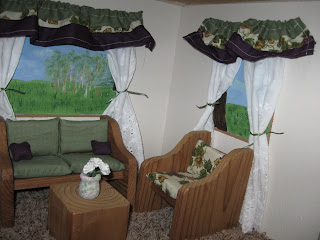 We also found these cute little frames at the dollar store and put acutal family pictures in them for Brylee. They are attached to the wall with poster putty so she can rearrange all she wants. 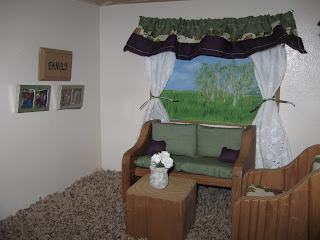 We made a big girls room complete with clothing chese, t.v., robe hooks, and mirror. 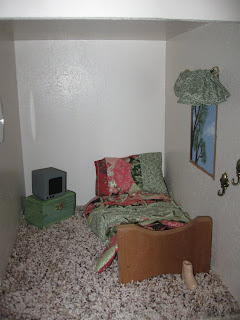 We made a baby girls room with a clothes chest, coat hooks, a picture of Jesus on the wall and a pink puppy. 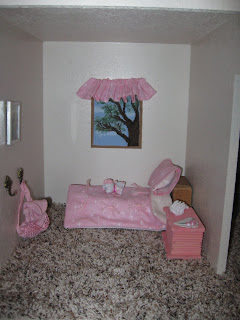 And we made a Ken room again with a clothing chest, mirror, tv, and robe hooks. 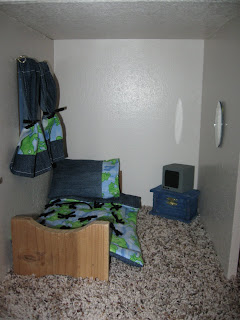 We had a fun time decorating it (that was always my favorite part of playing dolls when i was growing up-setting up the house). The kids couldn't wait to see what Brylee thought and they also wanted to play with it sooo bad. We'll see if they can keep the secret until Brylee's birthday.

Michelene had her baby today! Hunter and Brielle came to our house last night for an impromptu sleepover while Mich and Shaun headed off to the hospital. Mich was in labor but slowed down when they gave her some antibiotics. So the put her on Pit and that got things moving again. She had baby Archer Sunday Morning.

Brancyn and Brielle enjoyed some tub time Sunday morning while we waited for news from mom and dad. 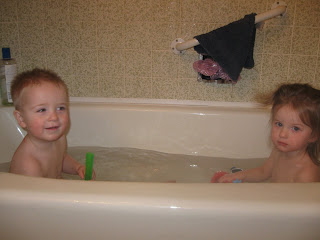 This is a picture of baby Archer when he is two weeks old. ( I didn't get pictures until then). Anybody that knows the daddy of this kid would say there is NO question who he belongs to:) 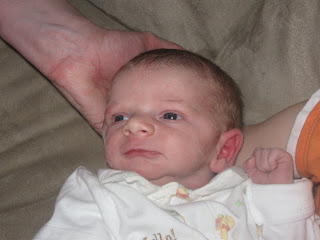 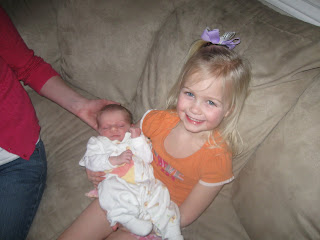 Liberty having her turn 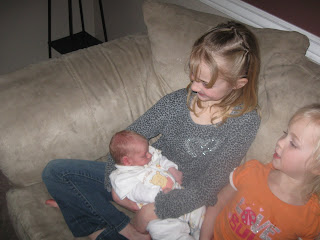 Kayson had a turn too, but I missed it while I was off getting dinner on the table.