I've been reading a lot of opinions about Prop 8 in California. And I really feel for all those who are in the tight situation of standing up for what they believe in despite possibly losing friends over it. This situation seems to be too sensitive for that result to be otherwise. I too have friends that have chosen an alternative lifestyle. I don't agree with what they do, but I still love them. A lot of people don't seem to think that can be true, but we can look at it from a different view. I don't believe in the consumption of alcoholic drinks, the use of smoking tobacco. I believe that stealing, murdering, being dishonest, etc. etc. are also not ok practices and yet I have friends that do some of these things too. Do I dislike the friend or not accept them NO, I just don't agree with some of the choices they make. Anyways, our Church leaders have encouraged us to post on our blogs whether we live in California or not about prop 8. Hoping to get the word out about why we feel Prop 8 should pass. I would like to borrow some info from a fellow blogger. She listed the reasons in a very easy to read format . . . . so here goes.

You don’t think Proposition 8 will affect you? Here are six ways LDS and non-LDS Christians will be affected if Proposition 8 does not pass:

2. Churches will be sued if they refuse to allow same-sex marriage ceremonies in their religious buildings that are open to the public.
The civil rights activists could fight to keep our church from doing temple marriages since same-sex couples could not be married in our temple or in our churches.

3. Religious adoption agencies will be challenged by government agencies to give up their long-held right to place children only in homes with both a mother and a father.
Children deserve to be in a home with a mother and a father. Catholic Charities in Boston have already closed its doors because of the legalization of same-sex marriage in Massachusetts.

5. Ministers who preach against same-sex marriages will be sued for hate speech and could be fined by the government. It has already happened in Canada, one of six countries that have legalized gay marriage.
Bishops, stake presidents, and other clergy of other faiths would be liable for hate speech if they taught their congregation that same-sex marriage or same-sex relations are sinful. This is taking away our freedom of religion!

6. It will cost you money. A change in the definition of marriage will bring a cascade of lawsuits. Even if courts eventually find in favor of a defender of traditional marriage (highly improbable given today’s activist judges), think of the money – your money, your church contributions – that will have to be spent on legal fees

So it's not just about whether we believe in the idea of live and let live. This has far reaching effects. And more consquences than you would first think. If this prop does not pass in california, it will spread to other states faster and faster. It will be knocking on our front doors sooner than we could even guess. So pass the word along. Let the world know how we think marriage should be defined and preserve our rights to worship as we choose.


DEFINITION: A rolled up piece of paper that you sing doo-doo-doo! into:)

Brylee has been asking me to watch her make a doo doo and then the above item is what she makes. I love what kids say. 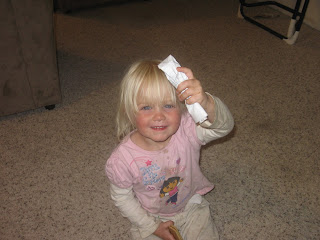 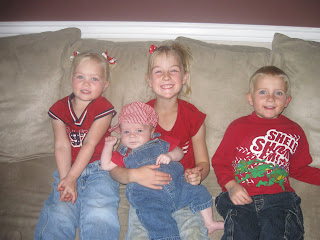 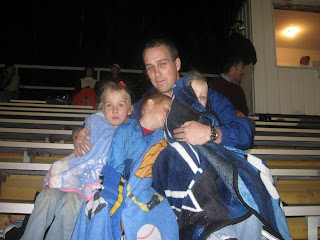 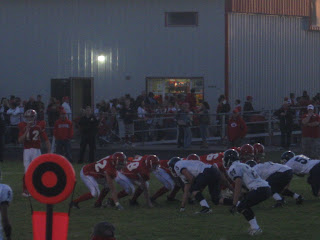 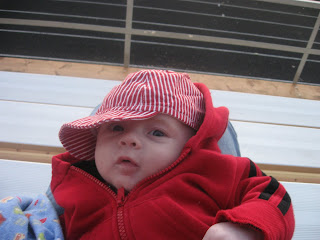 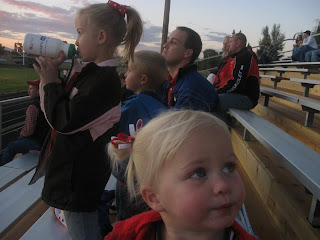 Well we've finally decided we're going to be "Madison County Long Termers." Kade hung up the stinger last night and traded it for a pair of claws as we rooted for the Madison Bobcats in their homecoming game. It was a fun game with the teams being close enough in skill level to make it a real game. We started off the game on a bad note by fumbling the ball immediately. This allowed the Twin Falls Bruins to score the first touch down. We came back with a touch down of our own shortly after. Then the Bruins scored two more times making the score 7-22. We finally returned with another touchdown of our own right before half time. Nobody scored third quarter and we scored at the beginning of the fouth quarter making it a tie game. Now the energy level was crazy! But sadly, the Bruins scored one more time with a great pass and catch in the last 40 seconds of the game:( Final score 22-28. We were bummed to lose it right at the end, but it was still a fun evening.

Here are some pics of the new home finally! We are so excited to be in it. We almost doubled our square footage of our last home and our lot is 1 and 1/2 times as big, and there's a garage!!!! Anyways, like I said we're excited, we finally feel like we have room to spread out a little:) 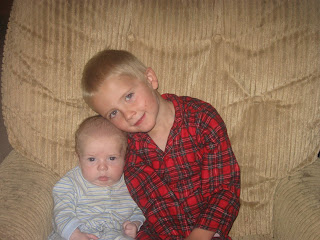 September 7, 2008.
Kayson was such a good helper this morning. He sat in the rocking chair and rocked Brancyn so that I could get the dishes cleaned up. What a good kid. 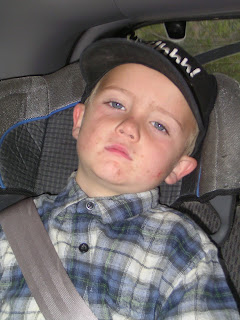 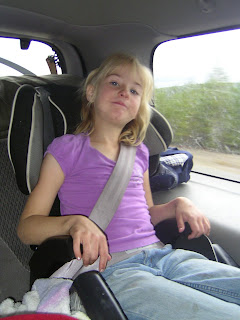 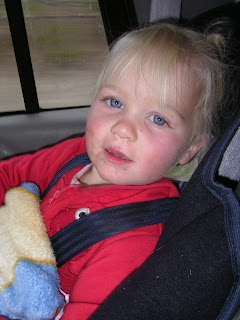 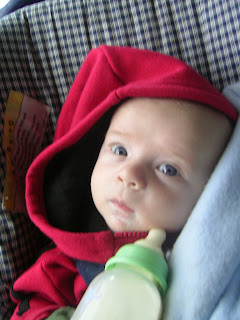 Speaking of thoroughly exhausting. Here is what the kids looked like on the way home from Yellowstone. I think we completely wore them out. (And this is at 10:30 in the morning when they should have been wide-eyed and bushy tailed!) 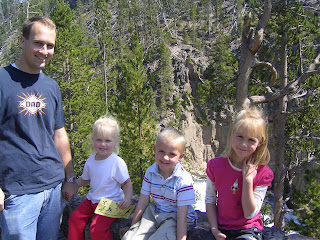 Checking out Gibbons Falls on our way to the campground Friday night. 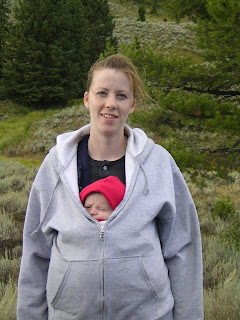 Bundled up for a hike to Trout Lake on the slightly cooler Sunday. 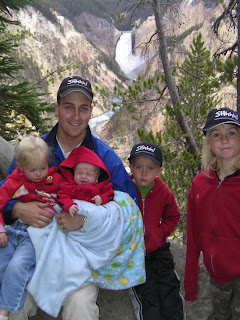 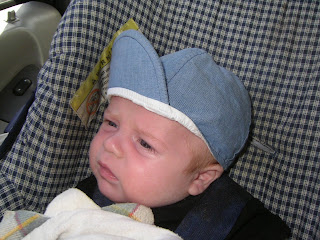 Brancyn with his trademark hat for the trip. Uncle Jarom said it looked like a 90's Ferris Bueller hat:) 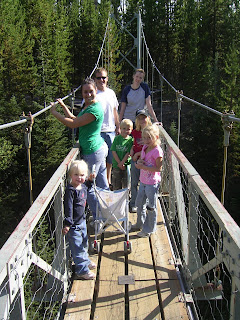 Looking over the bridge in Grant.


Off to Yellowstone for another fun-filled, thoroughly exhausting weekend! We had great weather for most of the trip and were able to enjoy the sights, sounds, and smells :), of Yellowstone. My camera pretty much died right before this trip and my new one hadn't arrived yet, so I didn't get very many pics. But, here are a few that turned out. 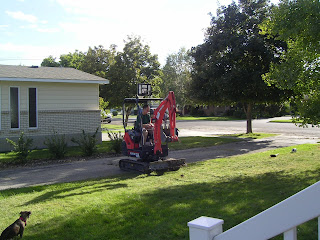 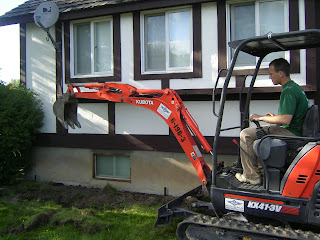 August 20, 2008.
Well my nice new yard didn't stay nice long. Kade went at it with a tractor tonight. It's sad to see it look all ugly right now, but at least it is for something good later. We are going to put egress windows in the basement. Our kids are pretty much trapped in the basement right now if there is an emergency, which scares me to death, so these windows were very first on the to-do-list after moving in. I hope everything goes well and we'll have the yard and house put back together in no time. 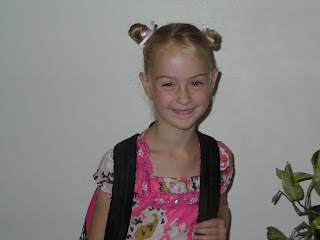 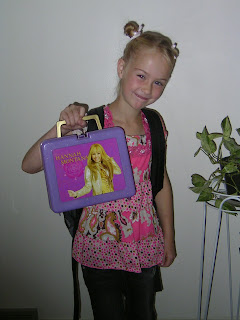 August 20, 2008.
Liberty's first day of first grade! She has been so bored the last couple of weeks and is so ready for school. She's especially excited to have lunch at school and for more recess than last year. 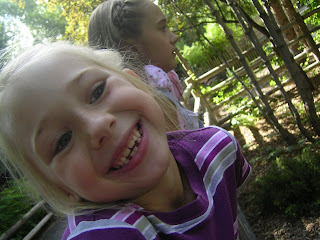 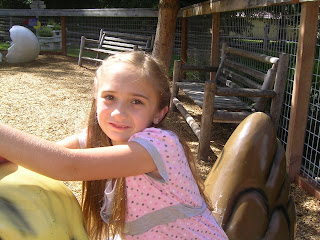 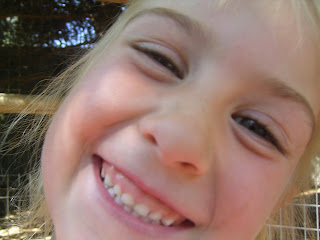 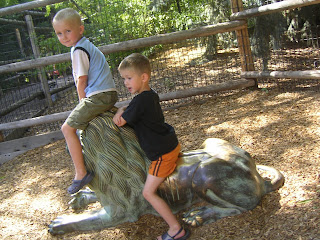 August 8, 2008. Yay! Kade comes home from San Diego today! To pass the time until his flight comes in (not until 10:30 p.m. :( we decided to go to the zoo. We invited Grammy, Aunt Elena, and Cousins. We had a lot of fun despite the scorcher temps. I let Liberty take the pics today. It's kind of fun to see things from her perspective. I think her favorite thing to take pics of is herself though. I have about five million close-ups of her face:) After the zoo, we had a picnic and played on the toys. It was a fun new playground that my kids hadn't tried out before. Thanks everyone for making the day go by so fast waiting for Kade!