Ok, for you men that are a little shy about "women" words I warn you to not read this post. If they don't bother you, read on! I've just been laughing this morning remembering how in high school, one of my good friends had a code word for tampons-they were called party favors. It was a good word, if you were in a public place, and needed to ask a friend for an emergency tampon, you would just ask her if she had any party favors. Now maybe people knew what we were talking about and maybe they didn't, but either way you felt a little less obvious and uncomfortable asking for a party favor. Well as of late my two youngest have discovered my stash of tampons in the bathroom cupboard and you know what? You would think they really were party favors. They have more fun opening them and popping those tampons up through the tube than just about anything I've seen them get there hands on. I don't love that they are wasting them, but it still cracks me up - other than I'm afraid there is going to be an untimely incident with one being opened and left in sight of front door company one day that I will miss!

Welcome new cousin baby Smith (we'll call him that 'cuz it's the only thing we can call him right now :) He made his appearance 4 days late (or maybe right on time-who knows what his schedule was) on October 13. He is a big boy weighing in at over 8 lbs and looks a lot like his daddy. He sure is a cutie and we're glad he made it here and that mom and baby are doing well. Congrats Quin and Natalie!!! 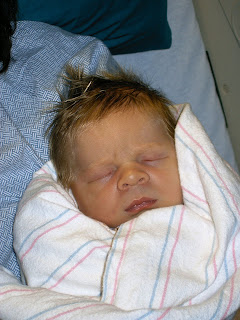 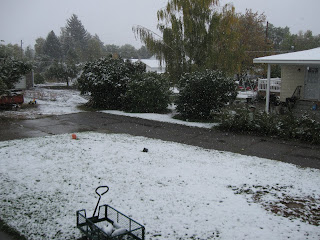 I just had to post these videos of my Genius child Kayson. They crack me up, but he definately is innovative. Sorry it is in two videos-it really isn't that long, Brylee just started pulling on the camera string at the end of the first video and so I had to stop and get her off to catch the second video. Kayson was pretty detrmined he was at this long enough for me to watch, then go find my camera, and then come and video tape the last of his efforts. Anyways, enjoy if you care to-I thought it was pretty funny.

Since my birthday fell on a Monday this year, we decided the whole family would go on a 'birthday date' with me. We took the kids to see Cloudy with a Chance of Meatballs (which I thought was pretty funny-it did poop out a little on the last 15 minutes though). Then we went out for Mexican food. There is one Mexican restaurant in town that me and the kids like, but that Kade doesn't so I have to use my birthday to be able to go there. And it was GOOD!! We finished up with gifts back at the house, but had to wait until the next weekend for cake. Their just wasn't time to get one made today. 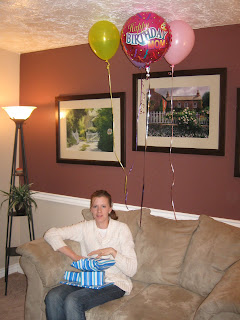 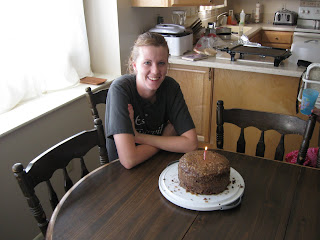 While Kylie was visiting for the weekend, I asked her to take a family picture for us. It turned out pretty good.
Deidra, Kade
Kayson, Brancyn, Brylee, and Liberty 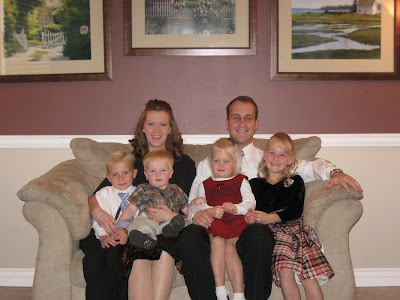 Today is the big homecoming parade and game. The second graders at Liberty's school are the lucky grade that get to dress up crazy and go to the parade to support the highschoolers. Liberty was all for painting her face and spray painting her hair, but we had to talk a little harder to get her to wear red tights under her cutoff shorts. In the end we talked her into it and she was way excited to dress up crazy like the highschoolers. And the parade was great. It is always fun and they give us more candy than any parade I've been to. It was only about a 20 min parade, but we came away with a grocery bag half full of candy!!! The kids were impressed:) My sisiter stopped in to visit tonight on her way to Washington so we didn't go to the game. Kade was keeping tabs on line though and it started to look close at the end so we walked over for just the last couple of minutes. In the time it took us to walk there, the other team had already scored again though, so when we got there, the game was basically over. Oh well, we'll get 'em next time!! 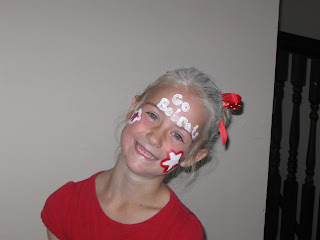 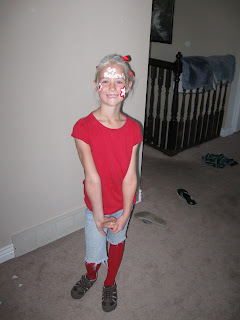 This week, my family came to visit and attend the Farley Family Reunion. They spent the first half of their visit at Michelene's, then we all went to the reunion for a night and then they spent a few nights at my house. While they were here, I set my little brother Cheston up with my neighbor's daughter. It was his first date. We had a game night with her one night so that they could get to know each other a little bit before the date. We probably scared her to death as we introduced her to the Farley's game of "Braclets". A silly game involving hiding a few braclets and a guard watching over them while the rest of the family tries to find them. It involves lots of running around, diving into hiding places, getting caught, and of course lots of laughing. It was so fun. I havent' played this since Liberty was a baby. We had about 20 people running through my house and everyone from 2 year olds to 50 year olds were in on the fun! It was a riot.

Kade and my Dad discussing the finer points of the game "Braclets". You can see that Kade is sweating to death. He was the one guard trying to catch all the rest of us. 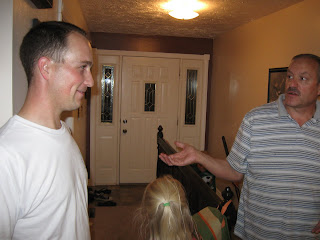 The runion was also a lot of fun. We haven't done an overnighter since I was a kid. This year my Aunt Judy offered the use of her cabin to all of us so that we could get together a little longer. It was great. I really enjoyed visiting with cousins, aunts, and uncles that I really don't get much of a chance to see. Thanks Judy for all of your hard work!! On the way to the reunion, we got a phone call. It was Gillian telling us she had just had her baby. It was great timing because my parents were going home that way and were able to see their newest grandchild. I don't have any pics of that little guy yet.

Tressie and Grandma Farley (The Matriarch of the Farley Clan) 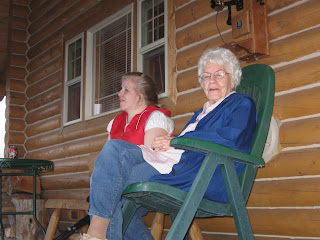 Judy set up crafts for the kids at the reunion 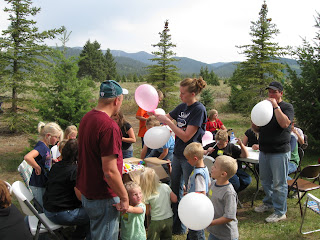 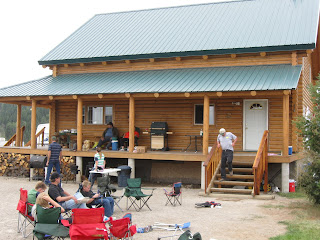 The first day of school. A much anticipated day at our house. The kids were up and ready to go(barely on time, it will take us a few days to get hang of the new schedule). I walked them to school and they were both of without a backward glance at me. It is sad to see them so grown up sometimes, but at the same time I am glad they are independent strong kids that aren't afraid of new things. Even though we just live around the corner from the school, the principal wanted Kayson to ride the bus home just so they wouldn't be worried about him . So Kayson get about a 60 second bus ride home each day. He was actually pretty excited that they pushed the bus issue because he thought he wasn't going to get to ride the bus. So first day a success!!!

Liberty and her posing (she told me the other day she was a proposer-I asked her why and she said 'cuz the always poses for pictures. Uh, I think that's a poser:) 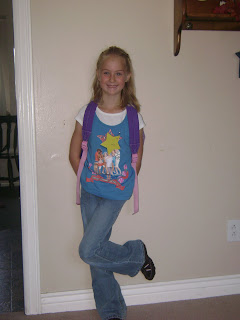 Kayson looking sharp in his new school outfit of choice 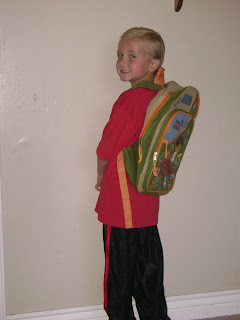 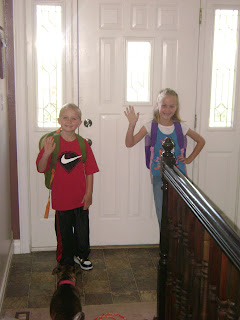 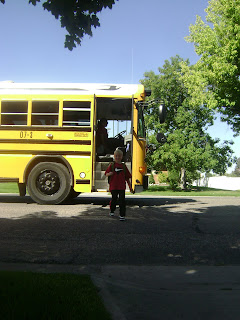 Ok, back to catching up.

August 22, 2009
Today we went boating with Grammy and Grampy. I have been part of this family for 10 years, and this is the first time I've seen the boat up and running. Everyone was excited to go take it out on the water. The plan was to head to Blackstail Resivoir, but when we got there, there was a big line (apparently we weren't the only ones trying to sneak in some boating time before school started). So, we decided to head over to Gem Lake and see if we could get in there. There was plenty of room for us as well as a nice beach area for the kids to play at. It was a fun afternoon. Everyone enjoyed a ride in the boat, many tried their hand at being pulled on the tube and everyone enjoyed a little sun. When Liberty and I had our turn on the tube, it started to lose air. We all but got pulled under as we tried our hardest to hang on. We got the attention of Grampy just in time for him to stop before we were tipped right over! Of course we had life jackets on, but I have to admit I still am a little nervous out in such deep water with my little ones:)
Brancyn enjoying some sand and surf time 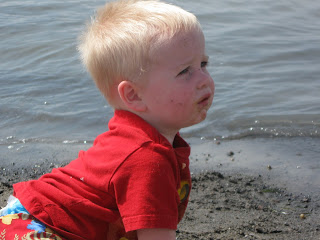 Kade and Kayson having a turn on the tube 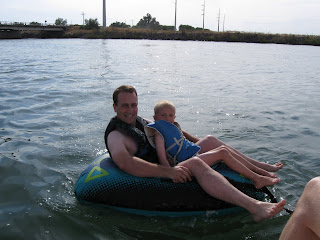 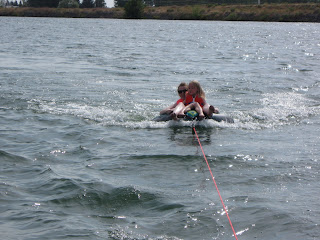 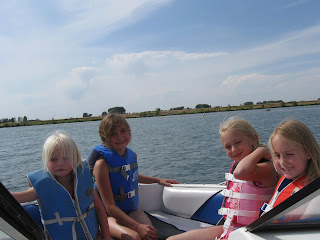