Kayson requested a spy themed birthday party this year. So we did our best to accommodate him. He had a birthdy cake with a magnifying glass and footsteps on it. And he got some much needed spy gear for gifts. He now has walkie talkies, sunglasses, spy glasses, pen flashlight, handcuffs, and i.d. We had Kayson's party at Grammy and Grampy's this year. We had invited them to our house, but then found out Grampy had hurt his knee really bad. So, we decided it would be easier to move the party to their house than it would be for him to have to come to us. It all turned out nice and I think Kayson had a good time. I just can't believe that he is five. That means my little boy will be off to kindergarten this year. Crazy!!! 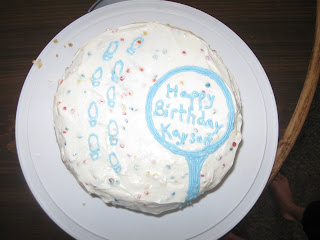 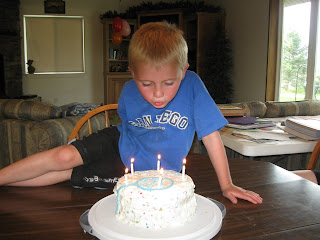 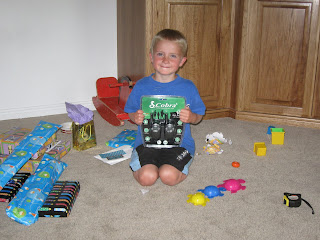 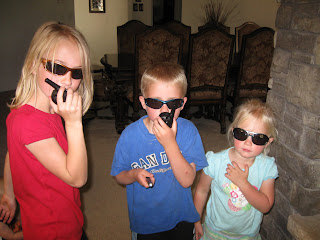 June 2, 2009
Brancyn pulls the cutest pouty face. He gets the whole family laughing every time he does it. So this video may seem mean, but we had to try and capture it live. It's not the best video, but it was the best we could get because usually Brancyn starts smiling the minute he sees the camera.

June 2, 2009
Brancyn has decided that he really likes to eat dirt, thus weeding the garden has been difficult. So this week I decided to see how he would do hanging out in the laundry basket. I thought it might deter him for at least a few minutes. But, surprisingly he likes the laundry basket and will sit in their playing with his toys and drinking his milk for about 45 min. It's great. That's just enough time to get a good weeding session done in the garden! Hopefully it will last through at least a few weeks of the summer. 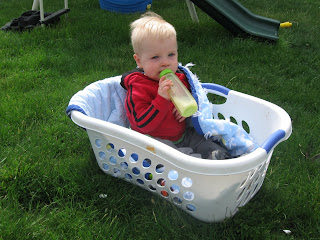 May 31, 2009.
Brancyn usually has his bath in the tub, he hasn't really experienced the 'sink bath'. Today it just sounded easier so that is how we did it. He seemed to think that was quite a treat. I couldn't resisit taking a picture:) 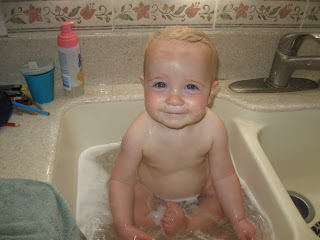 Kayson, Grampy and I headed to our Father and Son's annual campout. Our new ward held it at the Rock Creek Girls camp just like our last ward. We arrived at about 6:15 and set up our sleeping bags. We then headed over for dinner. We weren't the only ones who headed for dinner. Every mosquito in Fremont county was also there. I think I heard of one little boy who had 19 bites by the end of the outing. We had a really yummy dinner. Mashed Potatoes, Chicken, and Jello.

After dinner there wasn't a program so we decided to go to Cave Falls. We found that the cave at cave falls has caved in a little bit so it's more like a cove now instead of a cave. Kayson did not think it was too fun beind up on the pile of rocks so close to the water fall though and got a little bit scared. Although he did have fun looking at the water fall and wanted to go see more, but the closest one was a 6 mile hike and it was already getting dark. 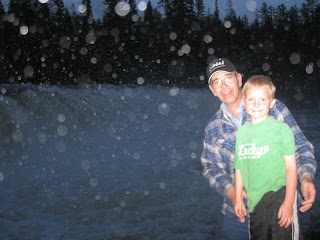 Grampy and Kayson at Cave Falls 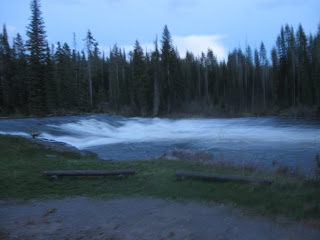 When we got back to camp, Kayson found the marshmallows were out. He asked me to cook him one so I did. When I finished he asked where the graham crackers were. There weren't any so I told him to use an Orea. He really liked it and started showing it to everyone. A few of the older people thought it looked good and they needed to try one. It was an instant hit around camp. 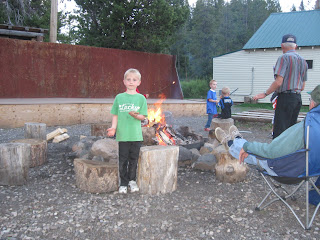 Kayson at the fire

The next morning we woke up and had pancakes, eggs, bacon, sausage, and hash browns for dinner. The mosquitos were back for breakfast as well. After breakfast we cleaned up our sleeping bags and played a game of kick ball. The kids had a lot of fun playing kick ball and when I say "kids" I include Grampy in that. 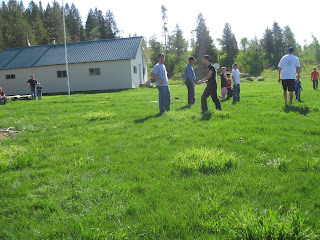 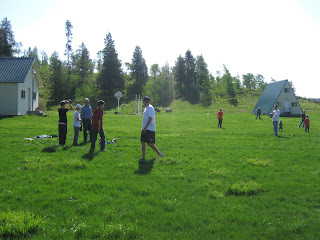 On our way home we stopped at the old Green Timber school for a quick geocache. It took us a few minutes to find it, but we did. Then we headed home to wait for next year's Father and Son's campout. 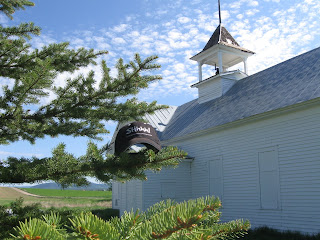 May 25, 2009
Everyone was feeling quite a bit better by Monday, so we decided to try a bike ride. This was our longest family bike ride to date!! We even felt like we got a little tast of Yellowstone when we saw some marmots along the way. Brancyn fell asleep pretty quickly and enjoyed a nice nap instead of the scenery. We finished off the bike ride by doing a little geocaching. The bottom picure shows a 'snake head' We were supposed to find the geocache by looking where the snake was looking. The kids found it and brought a toy car home with them for their trouble. The rest of our Memorial Day was spent relaxing and enjoying a nice BBQ. All in all it wasn't too bad. 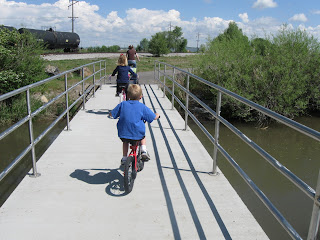 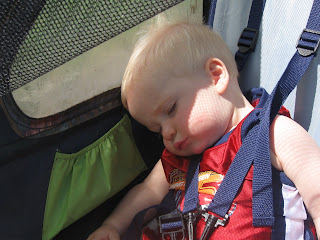 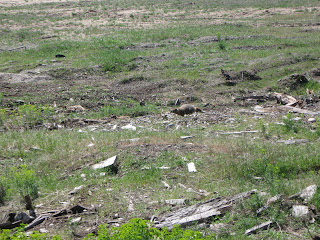 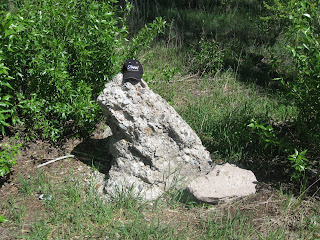 May 22, 2009.
Well we were supposed to be on our way to Yellowstone tonight, but fear of puking kids kept us home (side note: we thankfully glossed over this sickness with mostly a lot of weakness-no puking). The kids were not going to take their ruined weekend laying down though. When we sent them to put on their P.J.'s, they came back up wearing their version of Captain Underpants costumes. Kayson cracks me up. It looks like he is just wearing underwear bottoms, but really he has pajama shorts on stuffed under the underwear-he didn't want to be immodest:) What a nut. They were all pretty creative with their own interpretations of the costume. 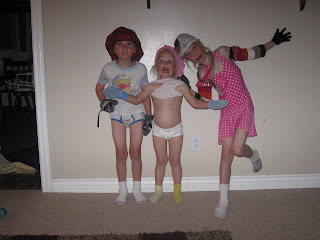 The kids and I decided to join Liberty for her end of the school year fieldtrip today. The weather was a little cool and I was afraid it might not be very fun, but it actually worked out great. Since it wasn't so hot, the lions and tigers were out and about. We had a lot of fun together, but I didn't get very many pics 'cuz it was a little nuts with so many school there. I'm glad I got to go spend the day with Liberty, but sadly we came home with stomach flu symptoms starting up which made us miss our annul Memorial Weekend Yellowstone trip:( 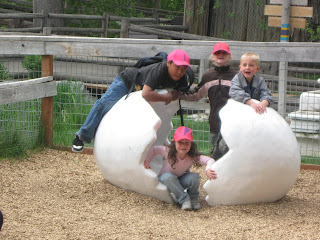 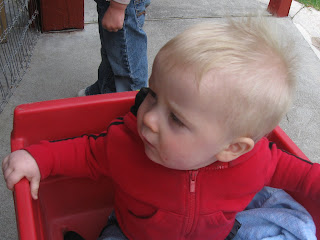 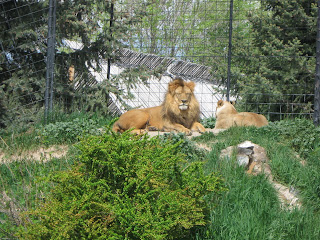 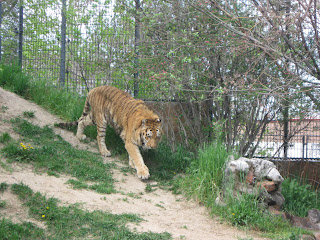 May 18, 2009
Sigh . . . . . I love it when my kids are actually playing like they are friends. I wish I could have been closer for this shot, but I was afraid they would move if I went out there . . .so I'll have to settle for this one of the two of them just 'chillin'. 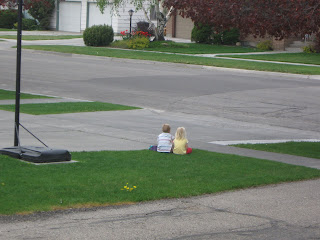 April 20, 2009
Kylie and Jake are headed to Wyoming for school for the next year. They called and asked if they could stay with us on their way to look for housing. We were excited to have house guests (especially when the guests include cousins)!!!! We enjoyed a good visit and some fun play time while they were here for their short visit. 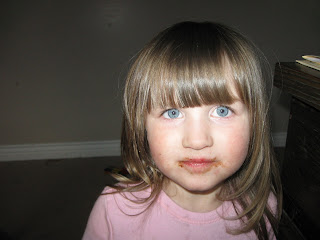 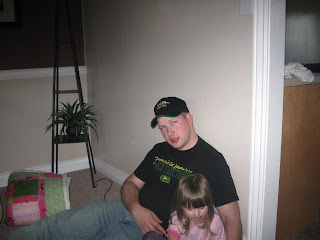 April 19, 2009.
This has become Brancyn's favorite past time. Whenever he finds the wipes left on the floor, he pops them open and starts pulling out as many as he can. It reminds me of the magic trick with the scarves. He loves the seemingly never ending supply of 'fun'. I think I'll just have to get him a few containers of wipes for his 1st birthday-he'd enjoy it more than almost antything else I can think of. 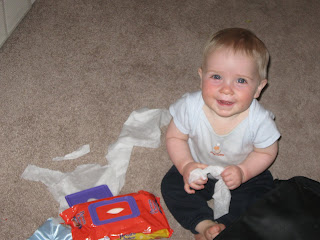