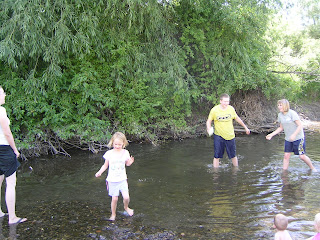 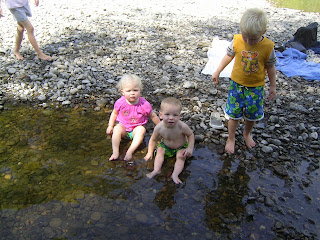 June 2007. We found a nice shallow spot of the river to play in this year. We took full advantage of it in the hot weather. It was deep enough in spots for the grown-ups to sit down and get cooled off, but also shallow enough to not scare the babies. We brought Achsah and Cheston here and Codi, Mich, and Hunter also came to check it out. Hunter was everywhere, what a water baby. 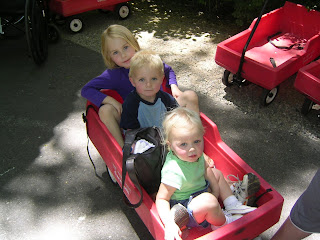 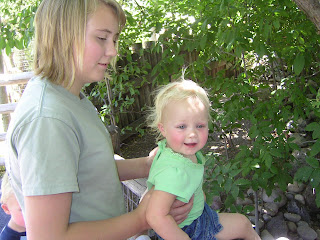 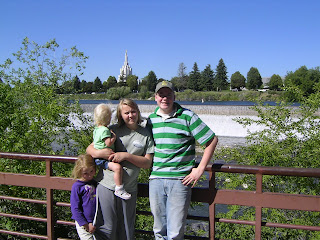 June 22, 2007.
Today we took Achsah and Cheston to the Zoo and to see the river while we waited for Kade's plane to come in. Of course it had to be about a hundred degrees and we were all wilting by the time we were done. But it was still a fun day. June 16, 2007.
Kayson was bathing at Grammy's after coming home from camping. Brylee got a little over anxious to see him and fell into the tub fully clothed. Needless to say, she wasn't very excited about falling in! 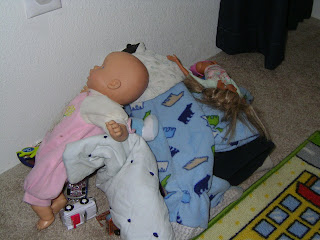 June 15-16, 2007.
Kayson and Kade went with Grampy to his Father and sons campout at Indian Creek near Palisades. This is Kayson's packing job. Since it was the Father & Son's campout I think he wanted to feel like he had some part of the girls from home around him. This was his packing job! He really had the essentials including a baby doll, barbie, and some cars. What a goof! 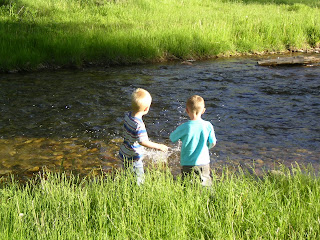 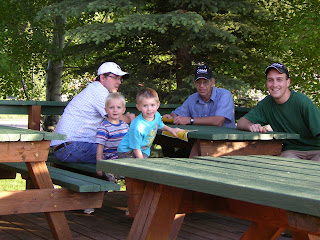 We really roughed it. When we got to the campsite no one knew what the dinner plans were. About 7:00 they started pulling out the dutch ovens and frozen chicken. We decided that we wanted to eat before 9:00 because the little boys were starving. So we drove up the road to Alpine and ate in the outdoors (at a pizza parlor). 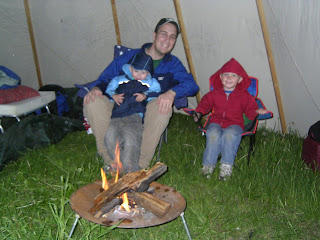 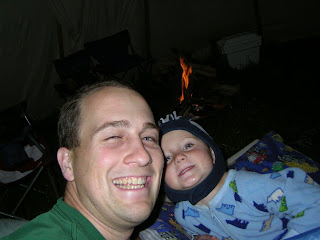 To finish off the roughing it we slept outdoors (in the nice tipi with a gas fed fire) and went off-roading in a big yellow jeep. We had lots of fun.

June 4, 2007.
Kayson got Car's cake and Grammy a German Chocolate, I think they were both pleased with them and they were definately enjoyed by everyone in attendance!

June 4, 2007
Kayson shared his Birthday with Grammy since we weren't going to be able to get together again the next day. So she aslo got to open presents and have a cake.

Kayson is thoroughly enjoying licking the cake batter bowl this morning. He is so excited that it is his Birthday! 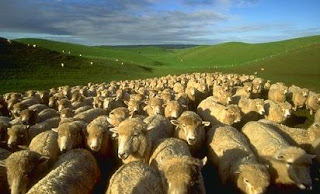 Lately to help the kids "pay attention" during scripture time we have been asking them questions to see if they understand. Tonight we were reading the story of Ammon protecting the King's Sheep in Alma. Deidra asked Liberty if she knew what a flock is (we told her what they are two nights ago). She answered, "Yes, it's that stuff you put in your teeth to clean it." Not quite what we taught her, but that's a pretty good answer. Atleast she is aware of her hygeine.