We invited Elena's kids over for a sleepover on the 30th. We had Kate, Carter, and Halle come over. The kids had fun playing games, and watching movies. They didn't settle down until about 12:30 (That sure made it hard for some of them to make it until midnight the next night:) The next morning we went out to try out our new sleds from Grammy and Grampy. The weather had cooperated and dumped quite a few inches on us the day before (so the grass was finally covered). The kids had a ball. Smith park was perfect, not too big or too small. We played for a good hour. Even Brancyn stuck it out and had a lot of fun. We finally called it quits, but just a minute too late. Kate was taken out by the boys on one of their last runs. Poor girl, she went flying. Thank goodness she wasn't hurt, just super scared. We went home and enjoyed some hot cocoa and lunch and then sent the kids home to get ready for their own New Year's Eve plans. 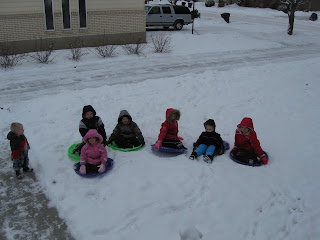 Loot at those rosy cheeks! 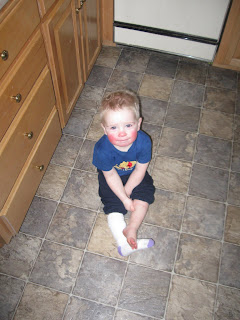 I somehow didn't get any pictures of our new years eve. We had my sister and her family over as well as a mutal friend's family. We enjoyed games while the kids played downstairs. It was slow paced (we had two very pregnant womet there:), but fun. The power went out about 11:30, so we toasted in the new year by lantern light. Finally it was off to bed, we all needed a good sleep-in, luckily the kids cooperated.