So while we were in the middle of building an office, we also got into the middle of redoing counter tops. Our old counter tops cracked, so we started looking at trying to fix or replace them. We found they couldn't be fixed, so we decided we were going to just have to replace them with laminate (that is all we could afford) Then someone told us the insurance might cover them, so we started looking into it. And yes, they did (at least a portion of it.) They covered the cracked piece, which is the largest in piece including the sink and bar. So we decided to replace them with Corian which was close to what we had. Now we have new countertops with a ten year warranty on them!!! 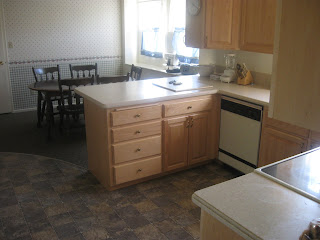 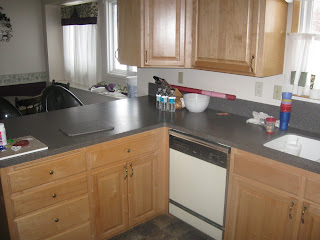 I love these countertops. I like deeper colors and even though my kitchen is pretty, I wouldn't have picked such light colored cabinets, so these dark counter tops kind of set them off. The countertops still have flecks of gold that match the cabinets, so it all ties in. 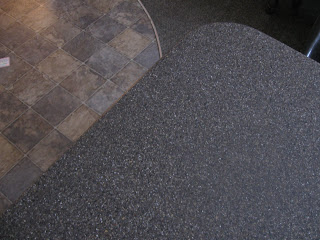