12-16-2011
I kind of lost my desire for blogging this year. . . . I'm sure you've noticed:) My last post was last Christmas. But, today I just had to sit down and write about Brancyn before I forget. Any of you that know Brancyn, know that he is fanatical about playing Angry Birds. I've had to change the lock on my phone so that he couldn't get into it. Otherwise I would find him secreted away in a closet playing Angry Birds to his hearts content and running down my battery. Well recently when he was told he could not play Angry Birds one day, he decided to take matters into his own hands. He talked Brylee into being a pig , and instruced her to sit on the couch. Then he would 'launch' himself across the room and crash into her. I thought this was pretty creative and was getting a good little laugh out of it. But, it got better. If you've ever played angry birds before, you know that there are different kinds of birds. After you launch the birds, you can tap the screen and make the birds split into more birds, gain extra speed and strength, or blow up. So, after Brancyn had launched himself a few times across the room, he started slapping his chest mid flight (to make himself blow up, seperate, or go faster.) It was hillarious. What a silly kid.
While I'm posting about Brancyn, I might as well add a picture from this morning. This is what Brancyn was busy doing while I was doing my hair this morning. 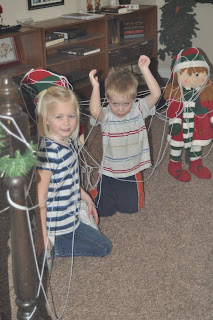 Brancyn is very into Spider Man and decided to make a web in my living room. . . . And this comment leads me to another picture I have to post. It is my favorite Halloween one of Brancyn. Kade got a new camera for us in October and has been having fun with it. I particularly love this picture 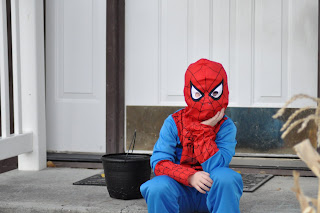 I think he was tired of the pics and just ready to get trick or treating. But, it still made for a cute pic.

What a Gobber:) he makes me laugh so much:)

Nice !!! Pic Contact us for HIV/AIDS treatment in India