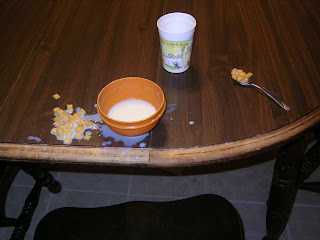 January 29, 2008.
I told Brylee that she needed to finish her breakfast this morning and then she could get in the tub. "o-tay" she says. A couple of minutes later she comes back "i'n done". I said you're already done? That was fast!! Then I go to clean up her spot and find this. I wouldn't exactly call it done, but she did empty her bowl! What a goof.

Liberty and Deidra have been following the Miss America pageant on TLC for the past week. Today they watched Miss Congeniality together. The show is about an undercover cop who thinks some bad people are going to try and kill the pageant winner by placing a bomb in the crown so she enters the competition to try and thwart their plan.

Just now I was in the family room preparing a lesson for church tomorrow. Liberty walked in the room and was frantically looking for Kayson. I told her that he went to bed and all she said was, "Oh." Then she sat down on the couch and looked around the room like she didn't know where she was. I asked her if she was awake and received no response. So I took her back to bed.

After she laid down, this was our conversation:

She then rolled over and never looked like she had even been out of bed. I guess she has my wonderful talent of talking in her sleep. 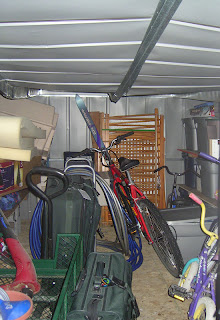 Yesterday I went out to our shed to shut the door because it had been left open. I was afraid that the door was going to be frozen open and I wouldn't be able to shut it. I pulled the door a couple of times to jar it loose from the ice. I was quite pleased that it actually shut.

I started to walk away from the shed, then thought to myself, "Wait a minute! Something didn't look right back there." I went back to the shed and well...all I can say is cheap Sears metal sheds aren't built for Rexburg winters!

I started to look around online and it look as though lots of people who live in snowy climates have had the same problem. About 6 inches of snow is all these things can handle. Who would have thought? Obviously not me. The other thing I found out is that there is a roof strengthening kit that you can purchase, but no where in the instructions for the shed is that mentioned. I guess you have to have a "beta" shed to figure it out the hard way.

Last night I had a church ball game that lasted about 2 hours because there were a million fouls. I didn't get home till about 10:50. When I got home, Deidra informs me that Liberty had just thrown up and she couldn't deal with the smells of cleaning it up. So I stayed up till about 12:45 doing laundry and making sure Liberty was ok. Then Brylee woke up about 4 times in the night every 1 1/2 hours. So I was dead tired to start the day off. 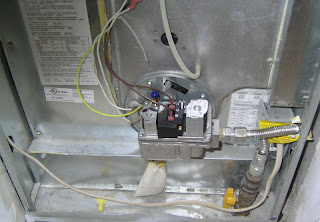 Yesterday's thought was "why does life always seem to be so fun?" Today's thought was, "You've got to be kidding me!" The day started out well. I served at the temple as a parking lot attendant and the weather was the best we've had in a long time. However, the instant I got home Deidra says, "The heater isn't working again."

Last winter right after a real cold snap our heater stopped working because the gas valve had junk built up in it. This time it was showing the exact same symptoms. Only the fan would kick on and no fire. Well, Deidra called United Plumbing and Heating and they wouldn't be able to look at it till Monday. We didn't want frozen pipes so we called back and asked if they had our part in stock. Turns out, someone else had ordered the part yesterday, then called back and said they didn't need it. I'm thinking, "Awesome, what a blessing for us!"

So I ran over to the store and picked the part up for $79.95. Had to defrost the main gas valve on the outside of the house (a few taps with a hammer) to shut of the gas. Then I tore the old gas valve off. I couldn't get a part off the old one because it had ceased on. So I had to go back to the store and use their vise to get the part off to transfer to the new gas valve. Finally I got everything installed and turned the heater back on...or so I thought. Nothing! So then I got to looking at the thermostat. Liberty had flipped the switch from heat to cool. No wonder why the heater wasn't working, it wasn't supposed to be. On the bright side, we have a new gas valve and the old one was wearing out anyways.

What a fabulous Sunday we had today. It all started out with Liberty being a grump from the moment she woke up. She wouldn't move faster than a snail. We barely made it to church on time. All through Sacrament meeting Brylee kept wanting to sit with Dad then Mom. Of course, we were on opposite sides of the bench so she had to crawl over Kayson and Liberty. Everytime she'd crawl over Kayson, we'd here him say "Ow, BRYLEE!" Then she kept passing gas that made me keep having to check her diaper, but nothing appeared. I think she has Huidini diapers. I know the people in front of us had to just keep thinking, "Why don't you take that kid out and change her diaper?"

After the the rest hymn sung by the choir, Kayson got an excited look on his face and said, "PRAYER?". I had to tell him, "No, it's not time for primary yet." Then when it was time for primary he started crying because he didn't want to go.

At the end of church, one of the primary leaders brought Liberty to Deidra just bawling. Liberty would not tell her what was wrong. Later, we found out from our home teacher that Liberty was so upset because they did not sing to her for her half-birthday. At school they are celebrating her half-birthday this week because her b-day is in the middle of summer. She gets to hand out treats and have PE dance class So she thinks that you always get a big celebration for your half-birthday.