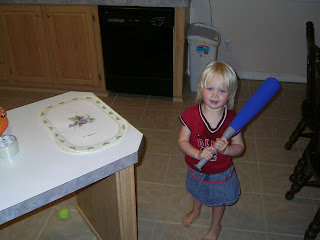 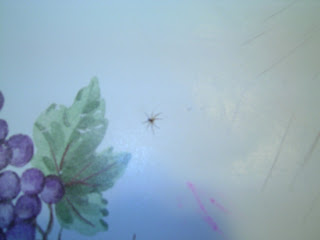 I'm going to try and play catch-up on the blog, but i'm not making any promises. So much has happened this month that I'll be doing good just to get the basics on here. Anyway, here is a fun one of Brylee. If anyone has been around Brylee in the last year, they will know that she has a huge fear of spiders. I've heard it compared to Aunt Elena's fear :) So today Brylee found a spider sitting on the counter. She let me know about it, but I told her not to worry about it. She just couldn't leave it alone, next thing I know she shows up in the kitchen - bat in hand-ready to take care of the spider! What a nut:)

Sooooo funny! I'll bet not even the bat would help her really get it. Poor little girl.

I definitely remember having to not say a word when we saw a spider in her room, or she wouldn't be able to sleep in there, haha! What a cutie :)