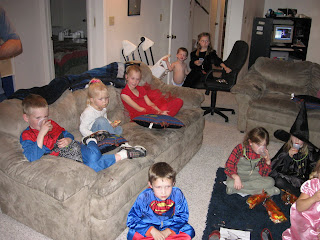 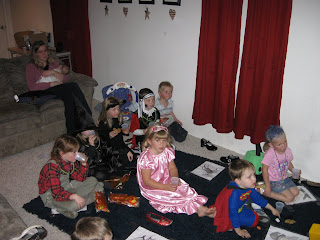 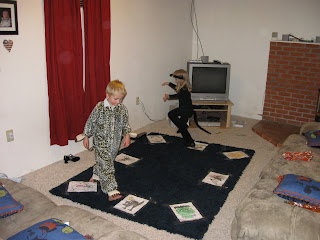 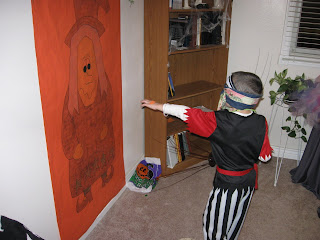 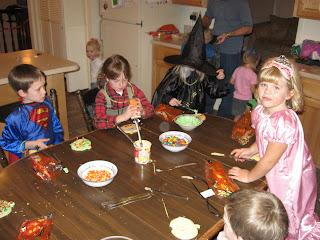 October 31, 2008
Party Time!
I think the kids had a lot of fun at the party. I know mine enjoyed it at least. I was running around so crazy that I didn't get pictures until everything was winding down and didn't get pictures of everything. (There were fourteen kids at this party!!) Basically we had a carnival. There was ring toss ( a glow-in-the-dark ring around a witches hat), bean bag throw ( halloween bean bags tossed in witches cauldrons), pin the wart on the witches nose, and musical squares (run around 'til the music stops then pick a halloween picture and stand on it). We also hunted for bone necklaces, decorated pumpkin sugar cookies and finished with one of my favorite donald duck halloween cartoons. It was crazy but lots of fun. Happy Halloween everyone!

Sounds like such fun. I'm sad we couldn't come. We didn't even end up hitting mom and dad's until 9 pm. It was a long day. And then Halle threw up later that night. Mmmmmmm...

You did a great job. I'm glad we got to see it first hand.

Hey your party looked like lots of fun. I think maybe I would like to try that next year!

My leaf pictures were taken a little while ago, I just hadn't got them on my blog yet, but my grass is still pretty green and my petunias may still have be blooming if I hadn't yanked them out to make cleaning the leaves in my flower beds easier. They were still pretty when I took them out!