Tonight we had an Elders Quorum party. The theme was Cinco de Mayo. They had mexican food and people made pinatas to bring. This one was made by the Elders Quorum Pres. He made this out of a box wrapped in Duct tape, wrapped in carpet, wrapped in cardboard, wrapped in carpet, wrapped in plastic wrap. The thing was crazy. They had every Elder and a lot of their wives beating on this thing with all their might, but it didn't give. They finally had to take the last three layers off before anyone could break it. It sure was funny to watch everyone try though. Just a word of wisdom for those who think this sounds like a fun idea for future use . . .don't have the dad's blindfolded and swinging a bat for all their worth on one end of the shelter while the kids are swinging at a kid pinata on the other end of the shelter. Every time the candy scattered, the kids followed and yep you guessed it, the candy scattered right over by where the dads were swinging. I don't know how many kids almost lost their heads tonight-literally. One of them being my son. Ugh, just makes me sick thinking how close a bat came to his little head . . . The old Elders Quorum Pres. and his wife made this golden calf for us to beat. lol. It was HUGE!!! 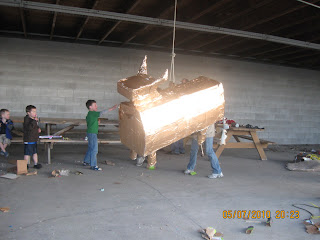