Liberty tried to instant message me today while I was at work. This is what she wrote, "dadwutryoudaooing." I thought that was pretty good!

Tonight during family home evening we learned about museums. We always start out FHE talking about what we did the last week that was fun or noteworthy. Brylee's answer for the past few weeks has been, "Grammy."

While learning about museums Liberty told us that things in a museum are from the "olden days". I asked each of the kids what somethings from the olden days are. Kayson and Liberty answered dinosaurs. Brylee answered, "Grammy." Then Liberty followed up by saying, "She's not from the olden days, she'd be dead if she was." 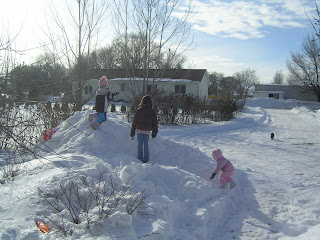 February 22, 2008
After looking at Elena's picture of melting snow and her grass starting to peek out, I'm jealous! Kayson has been asking me for two weeks now when we'd be able to see the grass. I keep telling him it will be awhile yet. We are definately melting around here, but as of Friday this is as far as the warmer temps have gotten us. And then this morning (Sunday) we woke up to another couple of inches before it warmed up enough to quit sticking to the ground. Maybe spring will come this year, I'm not holding my breath though. 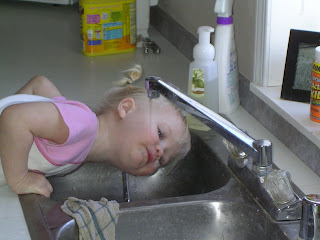 I have no idea where Brylee got the idea to drink out of the kitchen sink like this. It was so funny to watch her try to breathe and get a drink at the same time. Water kept going up her nose and so she'd have to stand up and then say, "More drink" and "my nose, my nose". Then she'd take some really deep breathes and go back in for more. 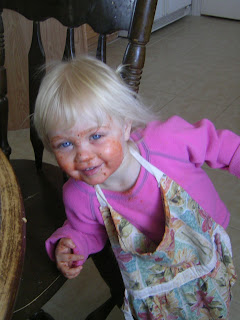 We found and oompa loompa at our house today. Isn't she just cute! She really enjoyed her valentines lunch of spaghetti. Her eyebrows were orange most of the day:) 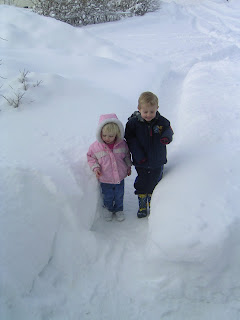 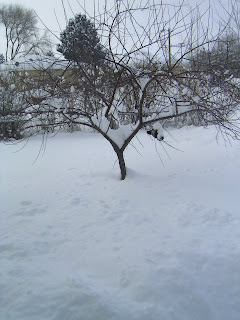 February 6, 2008.
I think this picture shows our snow at it's deepest this year. The pathway where the kids are standing is up to Brylee's armpits. There is still probably three inches packed underneath them. The picture of the tree probably shows the depth the best (at least if you've ever seen this tree in real life). Kade's guess is that the snow is three feet deep against the tree. It has been one crazy winter. 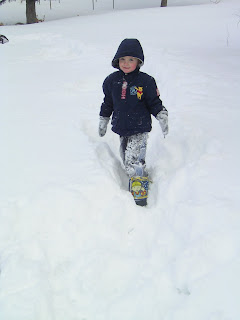 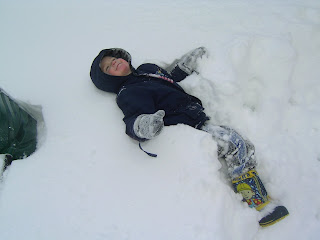 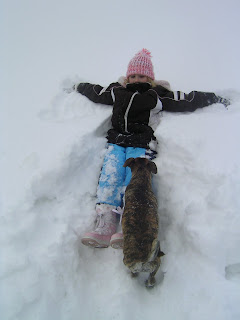 February 1, 2008
The tempuratures have finally warmed up enough for the kids to play outside ( if you call 20's warm). You can see the kids were up to there knees in snow, but the crazy thing is that the snow was twice that deep the kids were just too light to sink any further! 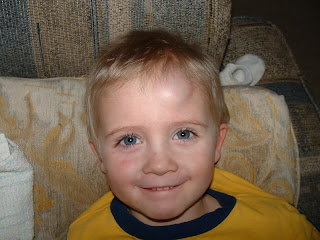 It happened, AGAIN! Today we went to Idaho Falls to get some stuff from Lowes for our house. Deidra went to the store alone with the kids for about an hour while I went to an appointment. The entire time she had to keep telling the kids to stop climbing on and under stuff.
I met them at the store when my appointment was over and we were finishing up our shopping. Deidra had to go back to the back of the store and while she was back there Kayson was playing under one of their large roll around ladders. As he was stepping out he tripped and fell flat on his head. Then came the "SCREAM" as Deidra is walking back to the isle she sees about 3 people start to rush over to see what happened and tells them, "It's not as serious as it sounds" before she had even seen the wound. She just didn't want them to all come over and make us fill out accident reports.

We're at Grammy's house today and she made us all a treat. S'mores! Who doesn't love them? I thought I would just share these photos with you all from our S'mores. 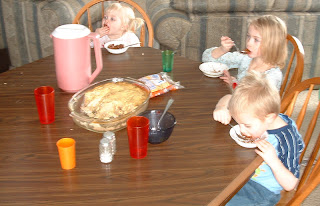 These are the kid's bowls... 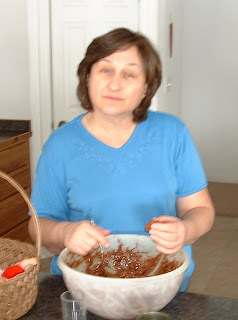 and this is Grammy's bowl. Notice the size difference.

Lately at work one of my co-workers has been talking about how everything at BYU-Idaho is copying the way Macintosh uses "i", but yet they use the excuse that it's the "i" in Idaho that they are using. For example there is the iMedia center and so forth.

Well there is definately a culture movement with the iPod and iMac and a few other iThings. However, I didn't think that it would influence a 2-year old the way that it has influenced Brylee. She is so hip. Lately she has been using the following phrases:

iJumping - When she's jumping around.
iBouncing - When she isn't jumping around.
iFalling - After she lays down
iRunning - As she tries to keep up with Liberty and Kayson
iGot iT- Whenever she accomplishes something
iKonking - She started konking her head on the TV when I pointed out the pretty flowers on President Hinckley's casket.
iEating - This comes before...
iDone - See cereal post below.