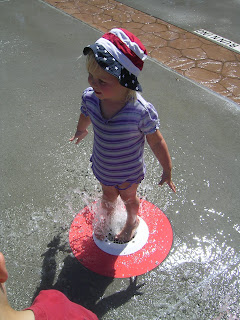 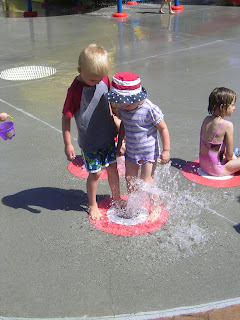 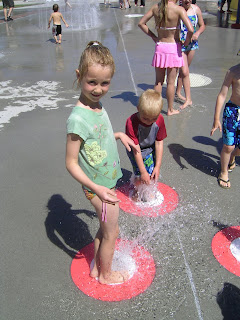 June 16, 2008.
The kids finally got to go the spray park today. It has been open since memorial weekend, but way too cold to be able to go. They all loved it, but surpisingly Brylee was the bravest of them all. She even went up to the water slide by herself to try it out. Poor thing got stuck up there though 'cuz it was so crazy and she couldn't figure out where to go. So I tried sending Kayson up to save her, he got halfway up before coming back screaming about the water falling on his head. Finally it was up to Liberty. She wasn't any more excited about going up than Kayson, but I talked (forced) her into it. She went up grabbed Brylee and they both went on the water slide. I'm glad they finally tried it. They were too intimidated last year because of all the water that might hit you in the face. Hopefully after all that they'll enjoy it more this year.

I just started laughing at the going up the slide thing. Kids.

Hope everybody gets to feeling better soon so that they can enjoy this nice weather we finally got. Maybe you can really air the house out now to get rid of some germs.

Seriously, Halle and Liberty could sometimes be twins (at a glance anyway). I looked at this picture and thought, "When did they take Halle to the splash park?"